When pharmacy owners list their “Gotta Haves” in choosing an automated robotic dispenser, their lists run the gamut. Any or all could be on the project wish list:

There’s No Room For Error In Healthcare

Usually, one item on the list is so important that it is non-negotiable. For Ron Strickland, that #1 need was accuracy. Hands-down. Deal-breaker. “With a pharmacy robot, the main function should be to count everything perfectly, right? It’s the whole point of automating,” says the owner of Lincoln Pharmacy in Lincoln, AL. He was adamant about accuracy because for 17 years, his old robot could not be trusted. “We were double-counting every script filled by the old one. We didn’t dare put C-II medications through it,” says Strickland. 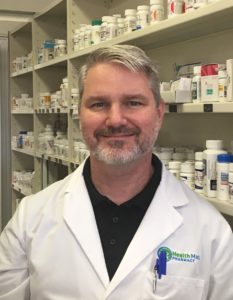 In early 2020, Strickland began researching for a replacement. He found the newest Kirby Lester model, the KL-SR Secure Robot, and he crunched the numbers; it would cost less to buy a new KL-SR instead of continuing his long-term lease with the old pharmacy automation. Affordability was good, but his ultimate decision hinged on perfect prescription counts. Since installation, Strickland’s KL-SR has delivered as promised.

The pharmacy’s 108 fastest moving tablets and capsules are quickly handled by his KL-SR, even controlled medications and expensive pills. “It’s a relief for us to be able to load any drug and trust that scripts will come out accurate. We don’t have time to waste time or steps,” says Strickland, who with wife Amy (both pharmacists), have seen Lincoln’s business expand steadily over their 20 years of ownership.

The KL-SR includes several security features to prevent diversion and replenishment errors. It is compliant with the highest industry standards for cyber security (Capsa Healthcare is ISO 27001:2013 certified, meeting the highest standards for cyber-security and HIPAA compliance). The system also includes newly engineered universal cassettes that do not require the Lincoln Pharmacy staff to ever recalibrate, unless they switch to a different NDC. To have cassettes quickly auto-calibrate and then stay calibrated was another plus, since there’s no room for inefficiency in this busy community pharmacy 45 minutes east of Birmingham.

The KL-SR automates fewer NDCs than the old robot, and Strickland admits that was a consideration. “We ran a usage report. After we got past cassette #100 on the old pharmacy robot, we were only dispensing 8-10 prescriptions per month total from cassettes 101 to 200. If you are only dispensing something every other day or every third day, why automate it?”

The KL-SR consistently handles about 70% of all tablets/capsules Lincoln Pharmacy dispenses and requires less square footage – two outcomes that pleased Strickland. The KL-SR is only 67” deep x 30” wide, easily fitting into the space of a row of shelving.

Switching to new pharmacy automation for retail or outpatient pharmacies can be daunting, especially when the old prescription counting system had been in place for almost two decades. However, Strickland noted the Lincoln team found the KL-SR to be more user-friendly. Full comfort level was reached in 1-2 weeks for all technicians. “If I had to give advice to other pharmacy owners investigating a pharmacy robot, I’d say explore what’s out there. You may be in a similar situation, where you could get newer, better technology, and actually pay less.”

Back
We use cookies on our website to give you the most relevant experience by remembering your preferences and repeat visits. By clicking “Accept”, you consent to the use of ALL the cookies.
Do not sell my personal information.
Cookie settingsACCEPT
Manage Cookies

This website uses cookies to improve your experience while you navigate through the website. Out of these cookies, the ones that are categorized as necessary are stored on your browser as they are essential for the working of basic functionalities of the website. We also use third-party cookies that help us analyze and understand how you use this website. These cookies will be stored in your browser only with your consent. You also have the option to opt-out of these cookies. But opting out of some of these cookies may have an effect on your browsing experience.
necessary Always Enabled
Necessary cookies are absolutely essential for the website to function properly. These cookies ensure basic functionalities and security features of the website, anonymously.
Non-necessary
Any cookies that may not be particularly necessary for the website to function and is used specifically to collect user personal data via analytics, ads, other embedded contents are termed as non-necessary cookies. It is mandatory to procure user consent prior to running these cookies on your website.
Functional
Functional cookies help to perform certain functionalities like sharing the content of the website on social media platforms, collect feedbacks, and other third-party features.
Performance
Performance cookies are used to understand and analyze the key performance indexes of the website which helps in delivering a better user experience for the visitors.
Analytics
Analytical cookies are used to understand how visitors interact with the website. These cookies help provide information on metrics the number of visitors, bounce rate, traffic source, etc.
Advertisement
Advertisement cookies are used to provide visitors with relevant ads and marketing campaigns. These cookies track visitors across websites and collect information to provide customized ads.
Others
Other uncategorized cookies are those that are being analyzed and have not been classified into a category as yet.
SAVE & ACCEPT
Powered by