Daryl and Eric McElwain are battle-hardened veterans of the COVID-19 vaccine tidal wave. Like so many pharmacy owners and managers, they had to creatively divert their staff in their Gananoque, Ontario retail pharmacy to handle the extra load. They were relieved that ‘Kirby’, their newest member of the team, was on the job.

The father-and-son team was referring to their Kirby Lester KL-SR robotic filling device, installed mid-pandemic just before vaccinations were made available and pharmacies took their position on the front lines. “Kirby was a huge help. It was like having another tech for 10 hours a day,” asserts Daryl, the father of the team and registered pharmacist; Eric is their business manager.

The movement to push pharmacies from prescription fillers to healthcare partners is steadily progressing through Canada and the U.S. This astounding pivot-point in pharmacy also stretches pharmacies to their limits. Doing more with the same staff level is a formula for failure; that is where technology like the KL-SR is the game-changer, especially when the staff is toiling for months administering COVID-19 vaccinations. 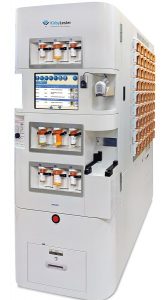 The McElwains operate three Pharmasave pharmacies in Ontario. Two smaller pharmacies are in Kingston and Lansdowne, ON but Pharmasave Gananoque (Store 736) is the family’s cornerstone, the top-performing pharmacy in its corner of southeast Ontario. In its 25th year of operation, Pharmasave Gananoque processes 130,000 Rx/year (60% is vial filled and 40% is LTC blister pack) and boasts a robust front-end business with home healthcare, diabetes, colostomy, compression wear and even an international travel clinic.

The expansion was necessary, even before the pandemic and ensuing vaccination boom hit. The McElwains did a major dispensary renovation that doubled the space to 1,200 square feet, and they fortuitously planned space for future dispensing technology.

“We had operated a Parata Mini that dispensed 45 meds, but we were moving on for many reasons,” Daryl says. “I saw a Kirby Lester ad and called in to see what this KL-SR was all about. Robots were always on the edge of our thinking, but we worried it was going to be just a more expensive technician. I tend to push for new technology and new processes because it looks good for our customers and makes you more efficient.”

KL-SR Self-Calibrating Cassettes Were The #1 Eye-Opener

The number 1 selling feature for the McElwains was the KL-SR’s self-calibrating cassettes – new medications are easy to swap in and out of the robot quickly. However, the number 1 ROI consideration was labor reduction.

“We lost an employee and didn’t need to replace due to the robot. It is way more efficient than adding another FTE,” Daryl says. “Plus, it gives us capacity whenever we need it. When international travel bounces back, our travel clinic will have a ton of hands-on work with vaccines. It will take a toll on our workforce and we know with the robot we can absorb it.” 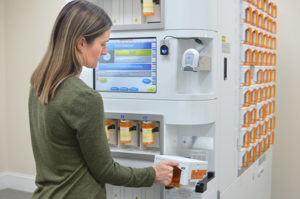 Daryl McElwain considered the biggest advantages from a pharmacist’s standpoint to operating his Kirby Lester robot.

Where You Can Learn More

Back
We use cookies on our website to give you the most relevant experience by remembering your preferences and repeat visits. By clicking “Accept”, you consent to the use of ALL the cookies.
Do not sell my personal information.
Cookie settingsACCEPT
Manage Cookies

This website uses cookies to improve your experience while you navigate through the website. Out of these cookies, the ones that are categorized as necessary are stored on your browser as they are essential for the working of basic functionalities of the website. We also use third-party cookies that help us analyze and understand how you use this website. These cookies will be stored in your browser only with your consent. You also have the option to opt-out of these cookies. But opting out of some of these cookies may have an effect on your browsing experience.
necessary Always Enabled
Necessary cookies are absolutely essential for the website to function properly. These cookies ensure basic functionalities and security features of the website, anonymously.
Non-necessary
Any cookies that may not be particularly necessary for the website to function and is used specifically to collect user personal data via analytics, ads, other embedded contents are termed as non-necessary cookies. It is mandatory to procure user consent prior to running these cookies on your website.
Functional
Functional cookies help to perform certain functionalities like sharing the content of the website on social media platforms, collect feedbacks, and other third-party features.
Performance
Performance cookies are used to understand and analyze the key performance indexes of the website which helps in delivering a better user experience for the visitors.
Analytics
Analytical cookies are used to understand how visitors interact with the website. These cookies help provide information on metrics the number of visitors, bounce rate, traffic source, etc.
Advertisement
Advertisement cookies are used to provide visitors with relevant ads and marketing campaigns. These cookies track visitors across websites and collect information to provide customized ads.
Others
Other uncategorized cookies are those that are being analyzed and have not been classified into a category as yet.
SAVE & ACCEPT
Powered by